One of the most common types of cryptic crossword clue you’ll come across is the anagram clue.

In these sorts of clues there is — as is usual with most cryptic clues – a definition, and some wordplay. The definition is a regular definition for the answer word. So, for example, say if we look at the word APPETISER. Starter, first course, or canapé, would be reasonable definitions for this word.

Now, in an anagram there are two rules that us setters have to follow. The first is that the exact letters to jumble up, to reach the answer, have to be in the wordplay part of the clue. These letters are called the anagram ‘fodder’. So in this instance, using APPETISER, just a few possible anagrams of this word are steep pair, pips eater, piper eats, rate pipes, and paper ties.

The other thing that has to be in an anagram clue is an indicator word that tells you to jumble up the letters. This can be any word that gives a sense of things being upset, angry, cooked, designed, confused, active, broken or even drunk. Words like amazing, badly, careless, devious, dizzy, in a whirl, and mixed up can be anagram indicators. There are hundreds, if not thousands, of possible anagram indicators, so the best plan is to look for the intent of the word, rather than trying to memorise the full list.

So, let’s put all this together for our word APPETISER. I rather like the anagram piper eats as it ties in nicely with the meaning of the answer.

In this clue, upset is the anagram indicator, and the fodder, or words to ‘upset’ are piper eats. The definition is canapé. Both the wordplay part of the clue, and the definition part lead to the same word: APPETISER.

Most cryptic crosswords have a good smattering of anagram clues, at least seven or eight, and often more. So look out for possible anagram indicators in clues, and see if jumbling up some words in the clues lead to some answers! 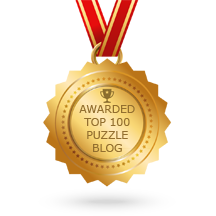 Please enter your e-mail address. You will receive a new password via e-mail.